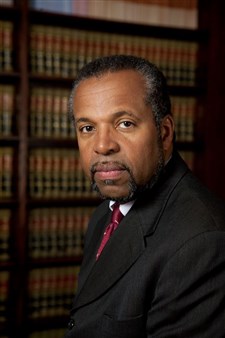 A product of his upbringing in the Lakeview community in Nassau County, Fred Brewington is an attorney with offices in Hempstead, NY. He attended the State University of New York at Albany, from which he graduated with Honors in 1979 with a Bachelor of Arts degree and further distinguished himself at Northeastern University School of Law by earning his Juris Doctor and being named commencement student speaker by his peers in 1982. He is a loyal and devoted husband to his lovely wife, Adrienne, a former attorney who is a pastor in the New York Annual Conference of The United Methodist Church.

Fred's legal and educational endeavors eventually led him from the position of law clerk in a number of prestigious firms and law offices – including a clerkship at the office of the Legal Counsel of the United States Senate – to his own gainful career in private practice. As a major component of his practice, Fred has opted to take on the challenges of Civil Rights litigation. From the successful challenge to the "at large" Voting system in the Town of Hempstead to preventing future unconstitutional and discriminatory purging of voters from the voting role, it is through his efforts that many gains have been achieved for the citizens of Nassau County and other areas of the State of New York. Fred is also an Adjunct Professor of Law at the Touro College — Jacob D. Fuchsberg Law Center.

Fred is a tireless advocate, and is devoted to representing his clients and community compassionately and competently, honestly and fearlessly. He draws his strength to do so from God, and from the recognition that many sacrifices have been made by many others so that he could progress. His deep Christian belief and philosophy of caring for people has been demonstrated in the field of community education and service, and has been exhibited by his willingness to place the needs of those whom he represents above his own. It is that selfless attitude that earns him respect among his professional peers and in the community at large, who have presented him with numerous awards. His concerns about affordable housing, community revitalization, employment, civil rights, provisions for social services, municipal liability, the environment and voting rights have been and continue to be addressed by his aggressive approaches against these injustices through litigating, writing, lecturing and making personal appearances. Fred’s service includes being a Board member of numerous not-for-profit community based organizations including the Nassau County Mental Health Association, the United Methodist Church Far Rockaway Mission, the Nassau County Bar Association, ERASE Racism, the Long Island Alliance for Peaceful Alternatives, the United Methodist Church General Board of Church and Society (Chair of Trustees), Vice Chair of the Lakeview Youth Federation, Inc. and the Advisory Board of the Long Island Housing Services, to name just a few. By such means, he has consistently demonstrated God’s gifts through keen creative and intellectual qualities. Fred has been blessed to represent the New York Annual Conference at the General Conference from 2004 through 2016 as well as at the Special Genera Conference session called in February of 2019. He served on the Global Board of Church and Society from 2004 to 2012 and as the Chair/Trustees from 2008 worked through a piece of major litigation relating to the GBCS trust funds. He currently serves on the General Church Standing Committee on Central Conference Matters.

Fred has served as a Trustee and as Chairman of the Administrative Board of the Church of the Good Shepherd, United Methodist. He is currently a Trustee for the Hempstead UMC and the Westbury UMC and has served as a parliamentarian for the New York Annual Conference. He is a Certified Lay Servant for the Long Island East District of the New York Annual Conference of the United Methodist Church and currently is an instructor for Local Lay Servants. Fred is a member of several Choirs, and currently leads the Gospel group, “The Shepherd’s Singers.” As the former chair of the District Committee on Stewardship, Fred has done district-wide training on a number of subjects for both laity and clergy as well as conference trainings. He continues to make service a priority — including as president of the Alumni Association of the State University of New York at Albany for which he has been a member for nearly two decades, a member to the Advisory Board of the National Police Accountability Project, a volunteer football coach in the Malverne School District and youth mentor. He acts as advisor to many community groups on a pro bono basis – holding strong to his faith as the very thing that leads forward to the things hoped for.