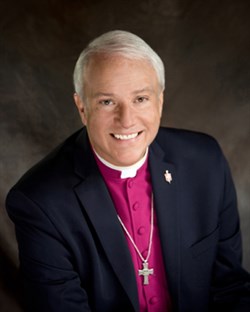 Bishop Thomas J. Bickerton was appointed as the spiritual leader of the 447 United Methodist congregations in the New York Annual Conference in the fall of 2016.

Bishop Bickerton was elected to the episcopacy in 2004 and served the Western Pennsylvania Annual Conference from 2004-2016. Most recently he served as the chairperson of The United Methodist Church’s Global Health Initiative which deals with the church’s response to the killer diseases of HIV/Aids, tuberculosis and malaria. This effort, through the church’s Imagine NO Malaria campaign, raised over $70 million dollars within the denomination to eliminate malaria-related death across the world.

A native of West Virginia, Bishop Bickerton began his pastoral career as a student pastor serving a six-point charge. He later was pastor of medium and large membership churches as well as serving as a District Superintendent. As he worked in partnership with laity, the churches he served experienced significant growth in the number of baptisms, professions of faith, and members. His church in Shady Spring, West Virginia grew from 85 to 225 members in his six years there, and during his nine years at the Forrest Burdette church in Hurricane, West Virginia, the membership more than doubled from 585 to 1368. The Bishop remains committed to the idea that the vitality of the local church is the key to carrying out the church’s mission to “make disciples of Jesus Christ for the transformation of the world” and, as a result, spends significant time preaching and teaching in local settings as well as working with his cabinet and staff in centering the life of an Annual Conference around facilitating the ministry of the local church.

Bishop Bickerton’s life has been significantly shaped by involvement in ministry beyond the walls of the local church. His work with Volunteer-in-Mission teams in his home state, as well as in Africa, Argentina, Israel, Mexico, Russia, Cuba, and the U. S. Gulf Coast, has given the Bishop a “true global perspective on the need to be in ministry to all of God’s children.”

Bishop Bickerton earned a Bachelor’s of Arts degree in sociology and psychology from West Virginia Wesleyan College (1980), a Master’s of Divinity degree from Duke University Divinity School (1983), a Doctor of Ministry degree from United Theological Seminary (1994), and an honorary doctorate from West Virginia Wesleyan (2015). He has also served as an adjunct faculty member at United, teaching Wesleyan doctrine and United Methodist polity.

Bishop Bickerton is the author of the book and accompanying study resources entitled, What Are We Fighting For: Coming Together Around What Matters Most and a contributing author to the book, The Future of the United Methodist Church.

The Bishop is an avid sports fan and enjoys travel, playing golf, and photography.

He and his wife Sally are the parents of Elizabeth (Chris), T.J. (Claire), Ian and Nick.