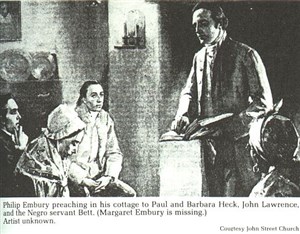 In New York City in the autumn of 1766 Philip Embury, an emigrant local preacher who had been converted to Methodism in Ireland, preached to a small group of five (including two servants) in his home, at the behest of his cousin Barbara Heck.

When some of her fellow emigrants began to give up Methodist ways, Barbara famously broke up a card game, threw the cards into the fire, and reminded Embury of his responsibilities! From this first small group would come Wesley Chapel (later John Street Church) in 1768.

Throughout 2016 the NYAC Commission on Archives and History (CAH), in cooperation with John Street UMC, celebrated the rich and diverse 250 years of New York Area Methodism that followed this first class meeting.